Thinking about using mAirList... but...

Hey,
I’m liking the system and am thinking of trialing it out on the student station I work for, but one thing bothers me…

When is 3.0 coming out? I don’t want to implement this system if the whole system will become redundant, it’s going to be a hell of a job getting the new database setup and everyone trained to use this, and if it then gets changed and requires a new DB format it leaves us in a bit of bother.

What is the timeframe for 3.0? If it’s not coming out for a while, what DB is the most future proof that will either work with 3.0 or can be migrated to 3.0?

It will take a while until a production release featuring mAirListDB will be available. Version 3.0 will be out pretty soon after v2.2 is finished, but v3.0 will be a “development release” into which new features are added, and should not be used for production. Once all new features have been built in and tested, it will be renamed to Version 3.1, then becoming a “stable release”.

For the moment, I suggest using either an OTF database or no database at all, storing the cue information in MMD files instead. Both can be converted pretty easily into a mAirListDB later.

The benefit of using MMD files for cue points is that dragging a ‘tagged’ audio file from ANY app. (including Explorer and MediaMonkey) on to a mAirList Playlist will always ‘pick up’ its cue points. You will also find that MMDs (like most mAirList data files) is an XML file. The computer boffins on your campus will easily be able to write you code to ‘grab’ all that MMD-file data and stuff it into mAirList DB once that is available … though I rather suspect that Torben has already planned an ‘import all my MMD files into this shiny new mAirList DB’ facility of some sort.

OTF databases can quickly become messy and cannot be refreshed while mAirList is running. For ‘looking up tracks,’ I’d suggest a third-party media management app. such as MediaMonkey. It is a good companion for mAirList in the sense that it maintains its own DB for you with minimum fuss or work, and tracks found in MediaMonkey searches can literally be dragged into a mAirList Playlist. You can also use MM as a poor man’s production workstation and compose and save M3U playlists; which you can later Load into mAirList.

Incidentally, if you use two or more PCs (studio plus production, say) make sure that ALL your PCs use the SAME drive/directory to refer to audio files. If one PC’s audio file directory is for example M:\Audio, and the other PC uses K:\audio, playlists saved on one PC will not be usable on the other.

Hello Brett, welcome to the forums. I’m sure you will find answers to any queries you may have about mAirList here.

Just to echo the comments from Torben and Cad and do not worry about changes that will appear in Version 3, I’m just as eager to find out what they are :o Though I feel certain there will be little or no problems in using or showing your users the additions/improvements.

though I rather suspect that Torben has already planned an ‘import all my MMD files into this shiny new mAirList DB’ facility of some sort.

Yes. When mAirListDB scans your folders and finds a new file to add, it will use the same mechanism to import the file as when you drag it from Explorer into mAirList (technically speaking: it uses the same functions and code). That means that any information previously entered into MMD files or file tags will be used right away.

OTF databases can quickly become messy and cannot be refreshed while mAirList is running.

There is a trick for this: Open a Database Browser, right click the OTF database and choose “Disconnect”. Then click it again and choose “Connect”. During the reconnect, the database will be refreshed.

I must admit that OTF databases are not a very sophisticated concept. They are a nice option to “convert” a folder into a database instantly. But they lack an administration frontend, so they’re not a serious replacement for a “real” database.

I think I should hurry up with mAirListDB.

I hadn’t heard of that before…

Maybe a possible new thread for the forum “TRICKS & TIPS” or something to that nature, im sure there must be other tricks like that which people use, that could help out other users?

Cheers, i’d rather use an OTF db than using external apps due to the fact that non techies need to be able to use it. Do cue points have to be saved to the db for them to work on a otf db? Doesn’t seem to pick up metafiles or file tags

Once a file has been imported into the database, its MMD file or tags will be ignored when dragging the file from the database browser into the playlist. Only the cue points etc. stored in the database will be used. (This is what databases are about: They store a list of files and their meta data - no need to look at tags or MMD files anymore.)

Once a file has been imported into the database, its MMD file or tags will be ignored when dragging the file from the database browser into the playlist. Only the cue points etc. stored in the database will be used. (This is what databases are about: They store a list of files and their meta data - no need to look at tags or MMD files anymore.)

Will the new DB project import this information? I can’t pitch this if they’ll have to change it all in a bit

Oh right sorry! Just one last question, is there any way to a) get the tag editor to save to database and/or automatically save cue information in the database without having to right click it, then go to PFL then save?

The “Save Database” button should appear on every PFL window (and the tageditor) - where else are you editing the cue points if not in the PFL window ?! The “OK” button only saves the item data within the Playlist/Cartwall - it’ll be forgotten the next time you load it, so clicking the Tag/MMD/Database save buttons is the way to commit the data. The “OK” button is generally only used by itself if you wish to edit the start/fade points of Playlist items in order to produce a custom-segueway.

Well i’m using mAirList 2.1.45 - because it has features which are essential.

This is the window… 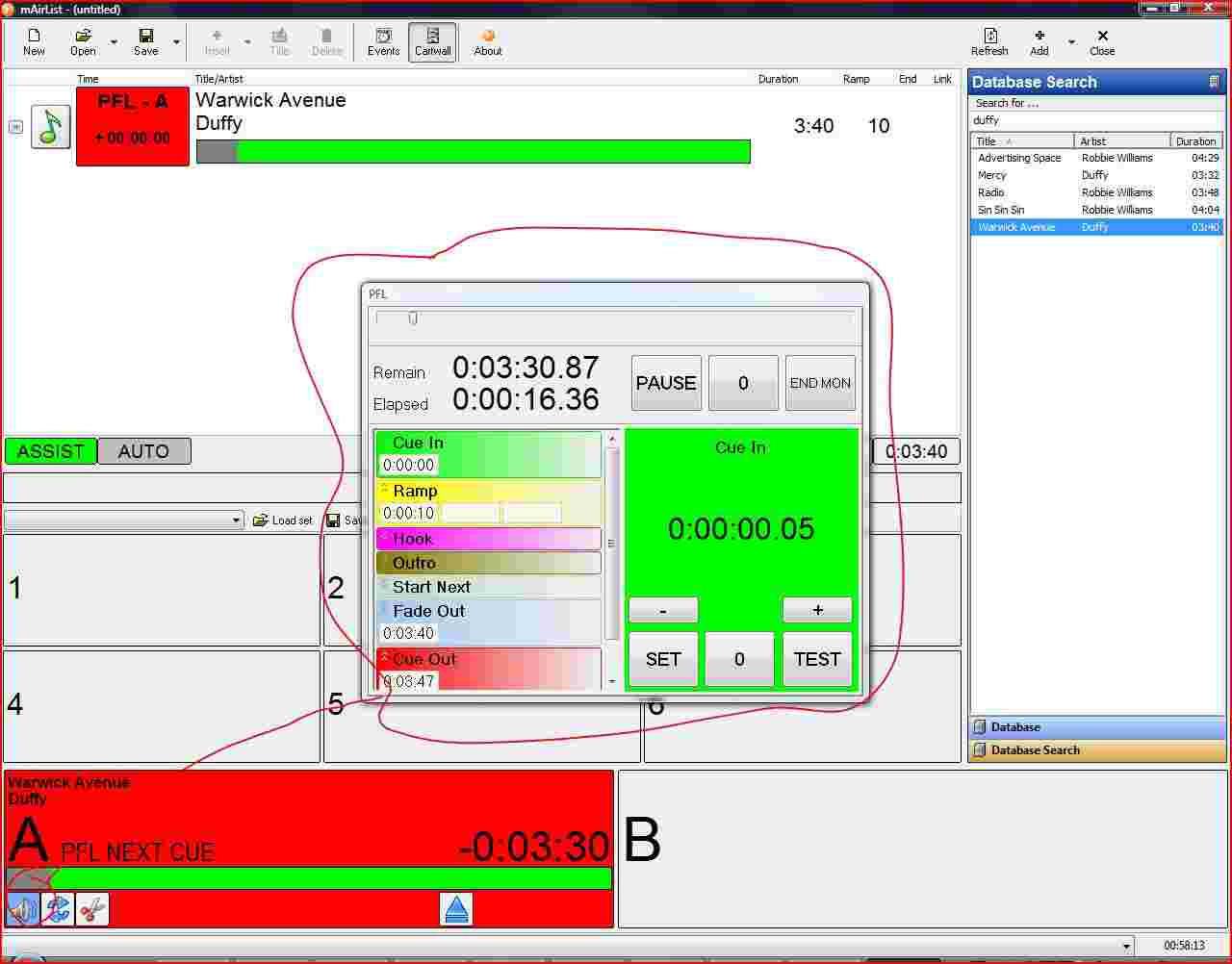 Right. Let’s clear a couple of things up!

[ul][li]To tag files initially (mark ramps, fade points etc.), you should use the File Tagger. This will ALWAYS show Save Tag and Save Metadata (aka MMD file) buttons. It will show a Save Database button if a DB has been set up (see below).[/li]
[li]The PFL dialog shown from Players etc. will only show Save buttons if these are ‘switched on’ in Configuration (see below). As Charlie said, this dialog is principally used to set up specific points within a Playlist WITHOUT affecting the track’s saved cue points.[/li][/ul]

To enable Save buttons in the PFL dialog which appears when you PFL a Playlist Item: in Configuration, click Miscellaneous, Enabled Features in the tree. Tick or clear the three checkboxes labelled Save to … and appropriate buttons will appear at the bottom of your PFL dialog. Remember that these buttons WILL CHANGE the saved cue points for the track (which is why they are DISabled by default). If you can trust your presenters, then go for it; but I still wouldn’t recommend enabling those buttons because it’s incredibly easy to wipe out the correct cue points for quite a chunk of your music library without even realising what’s happened.

To sum up, it’s horses for courses: use the File Tagger to initially tag files and save that info to MMD and/or DB and/or MP3 tag, and use the main PFL dialog only to set up ‘custom’ one-off cue points for a specific show (ideally, when you initially prep the show’s Playlist).

Thanks, I have an OTF database set up, but I still don’t see save to database in the tagger… 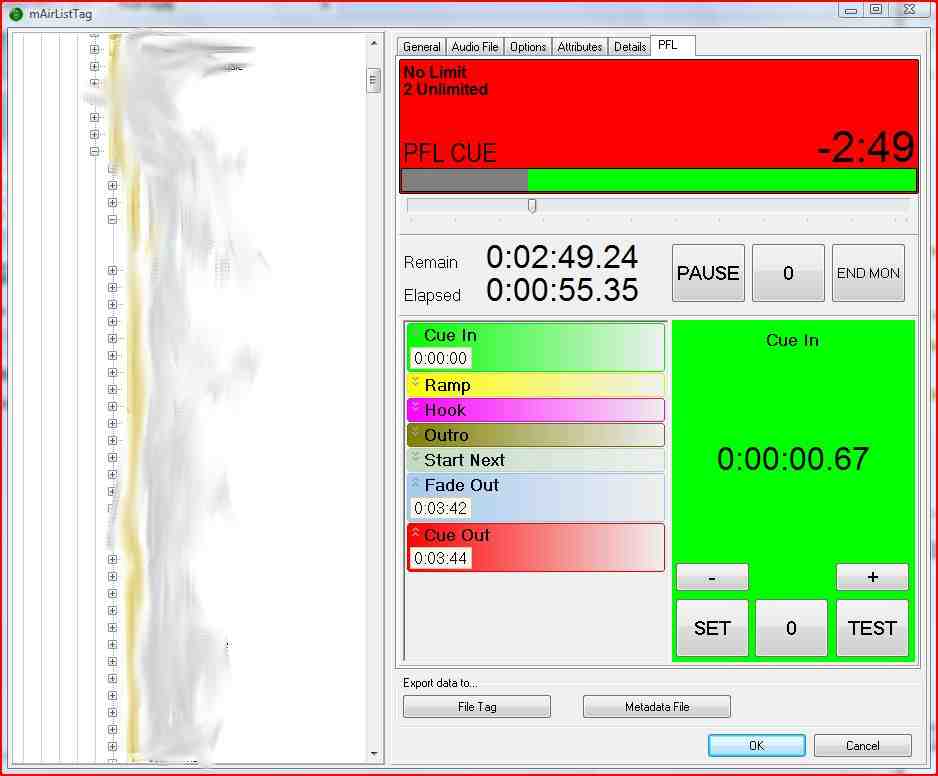 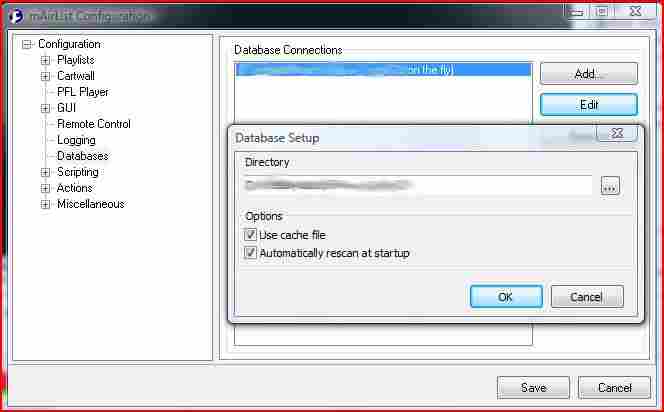 You need to enable the button in Enabled Features… 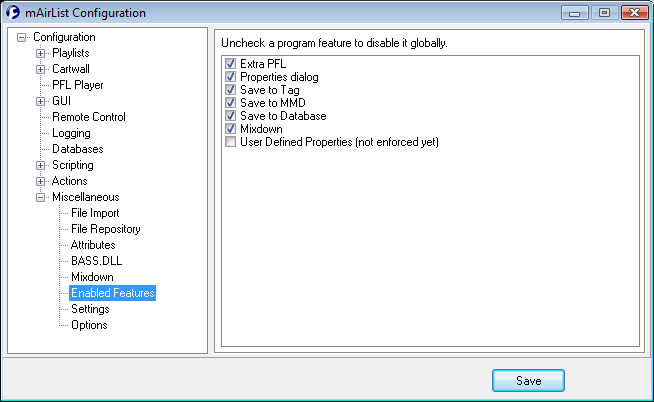 I’m only hiding my file paths, needless maybe, but I don’t like publishing my file system setup on the internet 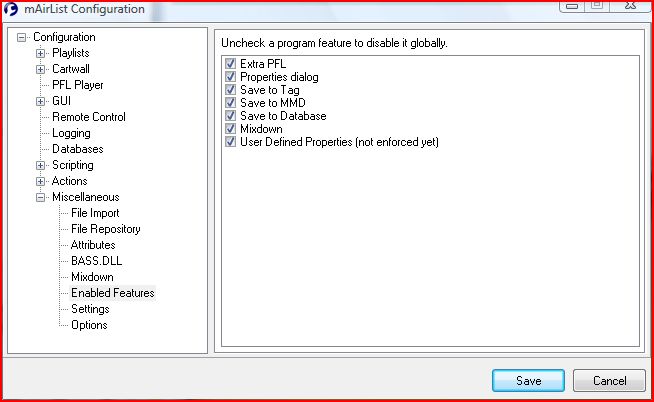 Try unticking the last option (user defined properties). This is not used yet.

[quote=“tony wilding, post:18, topic:5123”]Try unticking the last option (user defined properties). This is not used yet.

The database connections are not yet available in mAirListTag. But they will be from v3.0.