I’m using mAirlist now for a while and i’m pretty happy with it. There’s only one issue i can’t find a solution for.
My hours, build with the mini scheduler, are exactly 1 hour. Therefor i use the “load & playlist” option which starts the next playlist at **:00:00. But is it possible to use a script or event which prevent the last track to start and end within 10 seconds?
For example the last track started at **:59:40. So after 20 seconds the new hour event overrules playing the track.

Who can help me this one?

In the hour template, change the timing of the start of the hour and the end of the hour marker from “soft” to “fixed”.

Also edit your hourly event, use “append database playlist” instead of “load and play”. This will just append the next playlist at the TOTH, and the fixed time will take care of the rest.

Some people prefer to have the next playlist appended a few minutes ahead of the TOTH, e.g. at xx:50:00, so the DJ can see what will be coming up. In that case, don’t forget to tick the “Load the playlist for next hour” option in the action settings. See also here: https://www.mairlist.com/dokuwiki/features:actions#database

Okay, now it’s floating and the next playlist is loaded at **:00:00 but start playing after all the tracks of the hour before has ended.
My playlists are never exacly 1 hour. For example, by using the hour template, i create a playlist with at least 2-3 tracks more than needed so i never have a underrun.
What to do to start the next playlist after the last record crossing **:00:00 and delete all the tracks too much of the playlist?

Can you double-check that the start of hour marker has a soft fixed time of 00:00:00 set? That should actually leave out all “overflow” songs and skip to the first one of the new hour once the current one has finished.

Yess! It’s working now! In your first reply you said

In the hour template, change the timing of the start of the hour and the end of the hour marker from “soft” to “fixed”.

So i did. But it has te be “Soft Fixed” instead. That’s why i wouldn’t work right away. Now it is…

“Hard fixed” would start the first song at exactly the TOTH.

“Normal” would finish the entire previous playlist before starting the new one.

But how can i prevent mAirlist that at 59:55 the next track is loaded From that hour?

I want to prevent that mAirlist does that. I would say, last track 58:30

I have TOTH soft fixed and My event load append playlist and checked: next hour load and soft fixed time.

Hope you can help.

I have TOTH soft fixed and My event load append playlist and checked: next hour load and soft fixed time.

well, that’s a different thing. Many customers have a hard fixed TOTH and want to start a fill-up instrumental track at the end of the hour before in the time between 00:58:30 and 01:00:00.
We have a solution for that, but that does not seem to be the actual question.

What about a soft fixed time solution at the end of the actual hour instead of TOTH? 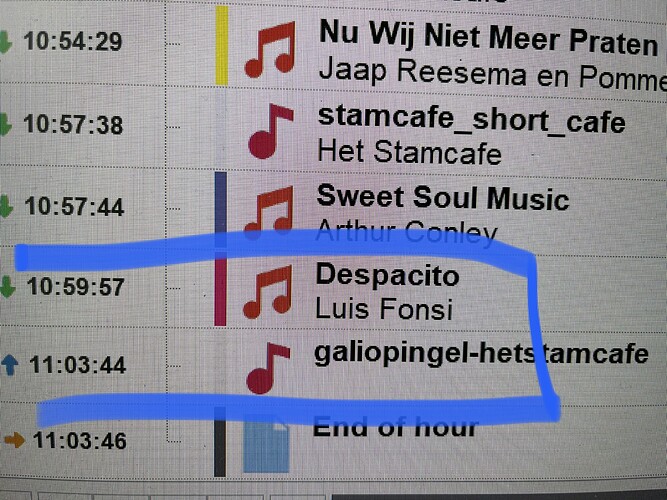 This is My problem Uli….

What do you think? An instrumental track as filler and TOTH fixed is not a solution for us

I hope you have a solution. It would already be great if no new tracks are being loaded after 58:00 .

Hi William,
If I understand you correctly. You don’t want a record to start at 59:45 or something like that? And you don’t want to cut off records. That is not professional. (in my opinion).

If I understand you correctly. 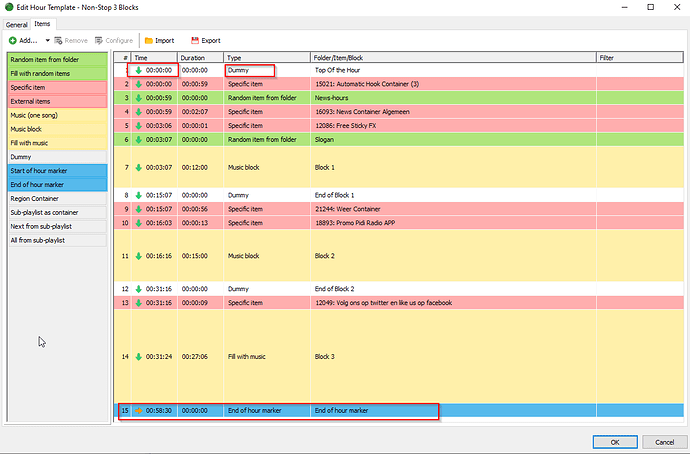 Well, what @administrator2 wrote last night was my first thought, too.
But I wanted to test it before confirming it. I was not sure about this solution.

There must be a way of avoiding this special kind of underrun.
It is possible that the next hour appended to the short hour will balance that out, but I would not give a guarantee on that.

@william
Would you please explain me the use of the backtimer before the soft fixed time?

Hai Uli, the last item is backtimed because i want this 100% to be played. It’s an commercial jingle so it must be played.

well, that’s a different thing. Many customers have a hard fixed TOTH and want to start a fill-up instrumental track at the end of the hour before in the time between 00:58:30 and 01:00:00.
We have a solution for that, but that does not seem to be the actual question

Hi UliNobbe, This is what i looking for. Can you please explane how to do this. Thank you in advance.

Yes, I will write a “How-to”. Please give me a little time for preparing some screenshots and translation.
At the moment there exists only a forum post in german.

It’s trick with a soft fixed time before the hard fixed end of the hour.

Ok take your time i can wait

This is the scenario: 90 seconds or less before the end of the hour no new title with a refrain should start; an instrumental track should be played instead.

The usual, basic setup of an hour template looks like this: 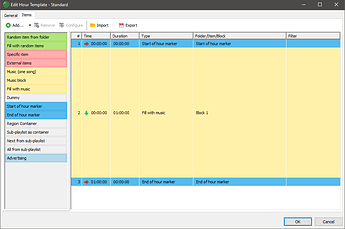 In some planned hours, something like this may happen:

Now let’s insert a soft fixed time at 00:58:30 with an instrumental track right out of a folder with those special tracks. 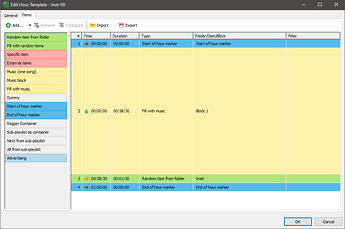 You need to specify this element like shown here: 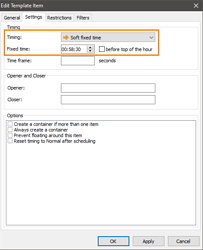 When the the last title with a refrain ends later than 01:00:00, the instrumental track ist still planned, but will be skipped:

However, you can set the times for the last seconds before the end of the hour individually; 90 seconds is only an example. Go your own way and test it.
Have fun!

Thank you this is the perfect solution for me. Thanks for your time and explanation