Hi guys, I was using mairlist on that awful platform that bill gates promotes, I have since decided that its not worth having that OS just for doing my radio shows and have returned to my beloved linux, is there a version of mairlist that is native to linux or must I use wine to run it. any help on this would be great.

also can anyone recommend a decent mixer desk which runs seamlessly with mairlist, fadr control etc etc, I was looking at the BEHRINGER Xenyx 1204 but not sure if mairlist will take input from the usb…

With the upcoming release of BASS for Linux, a Linux version of mAirList has finally come into reach.

The most serious problem is that part of the GUI will not compile under Lazarus (the Delphi replacement for Linux and other OSes), so I will most likely have to disable a few features in the Linux port. Let’s see.

I’m also not sure which of the remote control mechanism I can or will port to Linux. It will take some time until all of them are available.

thanx Torben, I guess untill then I have no choice but to use wifes laptop with vista, and still on that note which mixer is suggested for use with mairlist?

mAirList does not deal with input from a mixer. It just outputs audio on soundcards (which may then be connected to a mixer). Any soundcard will do.

I have just successfully run mAirlist 2.2.1 under Wine on Ubuntu 8.10.

Okay - so the BASS functions don’t work, so its a bit useless. But its a start! The GUI all appears to run fine.
I didn’t do an advanced test by any means - but perhaps if a Linux BASS option was to be built perhaps we might have some success running in linux?

I have attached a picture of it running (the layout never fitted on the resolution of my laptop screen in windows, so don’t worry about that :P) 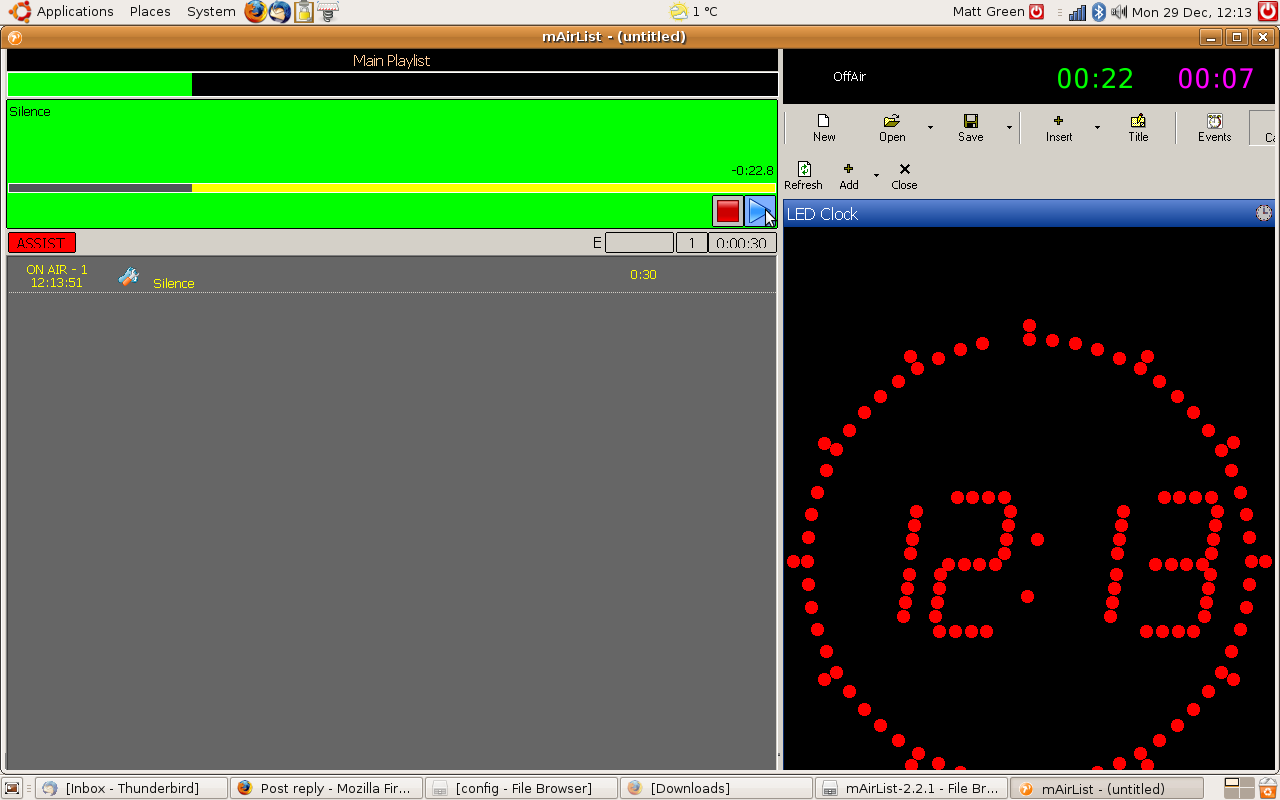 Much though I try to avoid everything to do with that awful platform that Mr. Torvalds promotes, an OS which is not worth having for any usage whatever …

mAirList does not deal with input from a mixer.

It’s extremely rare for me to disagree with Torben (except about M----s–t :D), but if your mixer has them, mAirList can utilise your mixer’s PFL or GO buttons (or similar output ‘tally’ signals) as Remote Controls, when connected through a suitable interface.

I presume that that capability was the basis of the question being posed by Mr. ‘w1zz3r.’

Now if you’ll excuse me, I’ll return to my beloved Windows XP … :-*

Cad, I was referring to audio signals, of course.

Seeing mAirList running on Wine is nice. But it’s not a feasible replacement for a native Linux port. At least I wouldn’t encourage anyone to run an unattended 24/7 automation system on Wine…

Let’s see how much effort it takes to port the GUI to Lazarus. (As mentioned earlier, the non-GUI core code of mAirList does compile fine with FPC/Lazarus on Linux.) I just need to get that database done first.

Bump.
I would like to use a native Linux version of mAirlist.
Google search shows that Bass for Linux, is and has been available.
Thanks.

If you read the above post carefully, you will find that it’s not BASS preventing the port, but the fact that several Delphi GUI components are not available under Lazarus/Free Pascal. That means that major parts of the GUI have to be rewritten from scratch.

Trust me, I do have plans for Linux (and Mac), but it’s not so easy after all.

How about 2022? I really don’t see a reason to use Windows anymore

No plans to support any other platform than Windows. As it would require a complete rewrite of 50% of the software (i.e. the GUI).

You may stop asking now.

mAirList runs on Arch Linux distro with Wine. Here is a working example:

Running mAirList on EndeavourOS with Wine:

Run, activate and play something! Have fun!