A new build is available, number 519.

This version features a complete rewrite of the BASS.DLL interface. You will notice that setting up your soundcards is much easier now. You just pick it from a drop-down list. No complex per-player config dialog anymore. The soundcard options (hardware or software mixing, sample rate, floating point, etc.) are now managed on a per-device basis in a central location (Modules -> BASS.DLL).

I believe this will make mAirList more user-friendly.

Also make sure to grab the updated license.ini file from the download site. It will unlock all modules, turning mAirList into Professional Edition.

The AudioLevel seems to default to -184.2 rendering ExtraPFL a bit pointless

I tried some of the BASS options but nothing seems to budge it. However, the files play at the normal volume in the Playlist - just silence PFL.

Sorted. Build 519 is on its way onto the server.

I urgently need a replacement for those default Windows sliders. Something which can be forced into a logarithmic scale perhaps. And something which doesn’t cause a feedback when you move the silder (slider is moved, PFL dialog updates value, playlist item broadcasts a “my amplification has changed message”, message is received by PFL dialog, slider is moved accordingly).

Torben
(still having a cold, getting through the day with Fisherman’s Friend Sugar Free Lemon from his RCS Europe giveaway sweets tin)

By the way, how to you like the new sound card config? 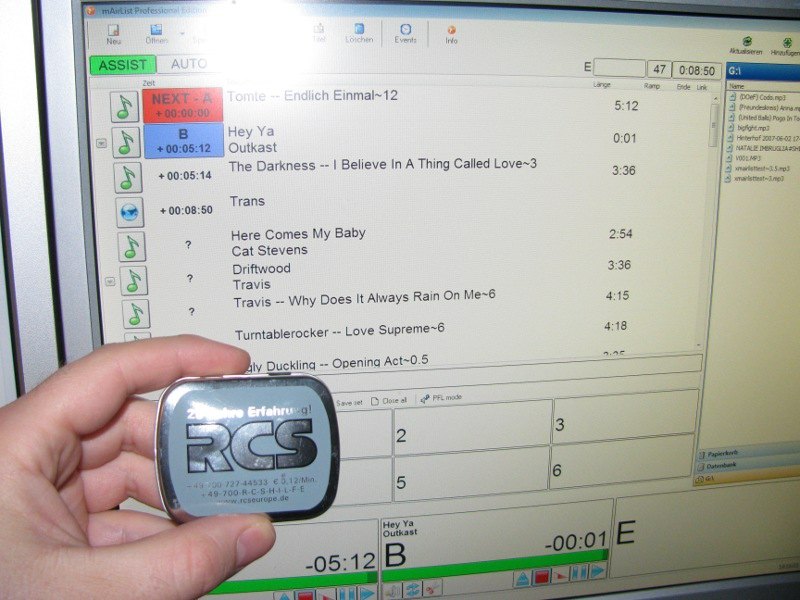 The sound-card config is much easier, nice one!

Right - the Amplification is working now, however it doesn’t appear to be working when mixing-down to a single WAV file.

StartNext in Auto doesn’t appear to be working now

He produces Totally80s and The Weekend Vibe which are syndicated radio shows here in the UK, he also works for London’s Heart 106.2. They (his home studio - not Heart!) use DARP to compile their 2+3hr pre-recorded shows. DARP has a simple voicetracking feature where it plays the EOF of the outgoing song and you hit “go” to start the next one - all whilst you are doing your DJ thing. When you’re done, it places the VT into the programme log and they simply play the whole log out “as live” and record it back into Adobe Audition and then apply some processing.

You may have guessed that I’m seeing if he can use mAirList as a total replacement… ie: set all songs to -6dB and/or VTs to about +5dB - record in-between the songs and then use Mixdown to complile the show. One of his major complaints is the “real-time” aspect of recording the shows and waiting 3 hours for their show to play out

Geek note: Heart106.2 are using RCS Master Control for songs and jingles - but also Genesys for split-ads and split-idents… The joys of radio groups merging!

I agree that the mixdown feature is one of the most interesting ones in mAirList, and also one which might be extended in many ways. (Although I’m not quite satisfied with the way it is implemented currently, but that’s a different story and only a matter of a few days of thinking and a few hours of coding.)

I have seen a similar VT feature in Zenon at Radio Ton. They even have a small three-fader mixer connected to the PC which can be used to alter the music volume while you record your voice. The resulting volume envelope is saved to the playlist, along with the recorded voice track. Works quite well actually, from what I saw when Timo gave me the studio tour.

Voice tracking will be one of the top features to consider when that d*mn database is finally finished.

I also need to implement a nice visual editor for the volume envelopes mAirList 3.0 now supports. It just that I hate GUI programming

That’s great news - I’d thought about using some sort of MIDI fader facility to manipulate the levels but thought it overkill… It is nice though to have full control over your VT’d shows.

Will you be using volume splines like Cool Edit ? ie: little square envelope markers where you can drag the fade level and duration or will it be a simple slide bar to move the audio back and forth and a checkbox to drop the surrounding audio to the pre-set global ducking level ?

Of course I prefer splines, but I’m not so sure about my GUI programming skills