Another layout, designed for single-screen use @ 1280x1024 resolution. There is no Cartwall on this layout. You’ll need to set your sound devices and hotkeys via mAirListConfig.

EDIT: You may wish to alter the border colour of the Global ProgressBar so that you can see alternative ramps on it:

[ProgressBar]
ProgressBarBorderColor=#FFFFFF (not #000000 as I originally had) 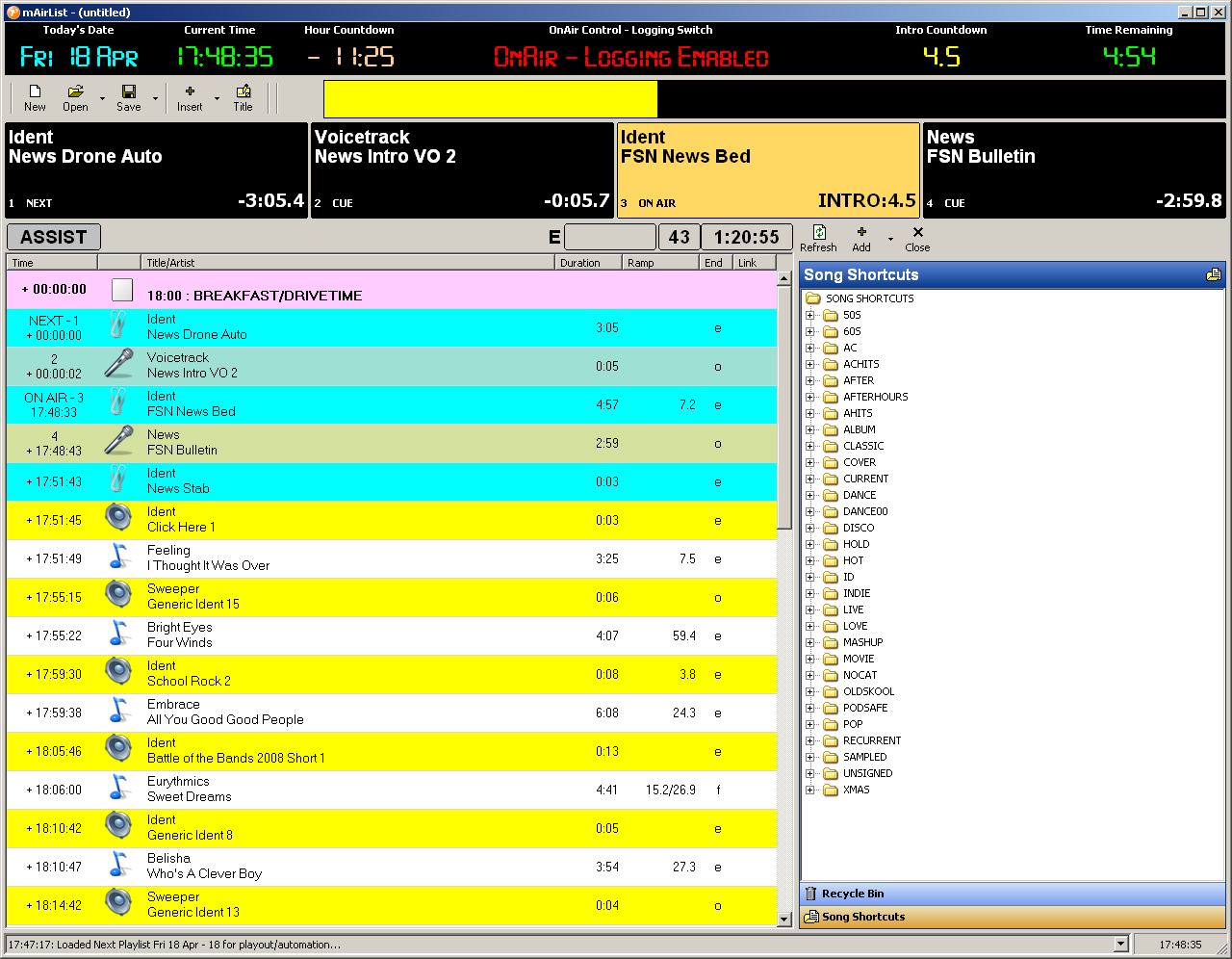 I am having a few problems as you can see any ideas ?

It looks like the ScreenObjects are not present - Are they all in the /config folder ? (they are certainly present in my ZIP file above). Note that my example was based on the latest "snapshot) update available here: http://www.mairlist.com/download/mAirList/v2.1/snapshot/

You’ve obviously got a widescreen TFT

as you’re running at 1440x900 - so you’ll need to run the layoutdesigner to adjust the widths to fit the whole of your screen. The only widescreen around here is the 42" one downstairs that the cat tries to sit on.

“Snapshot” is an in-between releases EXE that Torben releases when he adds/changes/improves certain functions. There’s a TXT file in that folder which explains what he’s changed.

ye i am running a 19" i will also upgrade mairlist to the snapshot then post back.And in the studio we dont have a 19 wide we have a 15 that runns 800x600 i think

Hi, remember to resize the layout as Charlie has already highlighted.

When working at different screen resolutions mAirList does not automatically re-size and re-position objects such as players or playlists. Hence not everything will display correctly.

We use several different layouts to resolve this issue. Most of the configuration can be retained, so is not too much of a problem.

Yes, run the layout designer (it’s a batch file in your main mAirList folder - if you’ve not got it, it’s attached to this post) which which will show a window with all the screen objects on, and then allow you to select each value and use your mouse scroll-wheel (or type the values yourself) to adjust the size/position.

Attached is how you edit the sizes - notice my Playlist has been shrunk to only 400 pixels wide. You can click inside the value boxes and scroll up/down to adjust, or type a number in. Obviously the maximum number depends on your screen res 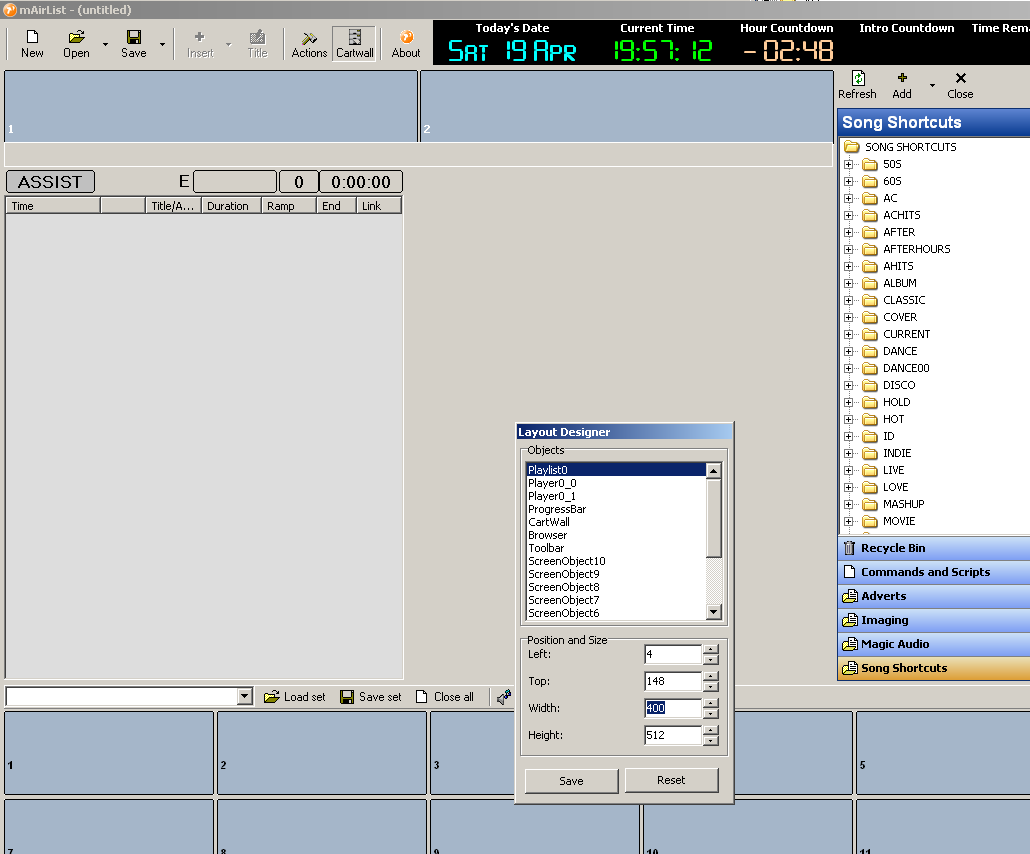 use your mouse scroll-wheel (or type the values yourself) to adjust the size/position.

For hayd93’s benefit: You will not see any changes you make with the Layout Designer until you stop and re-start mAirList. (That’s right, Charlie, isn’t it? ;))

Charlie, while I enjoy seeing your layouts, I have to say that your ‘LED’ font’s lower-case letters (i.e. Small Caps) look pretty horrible. I used to do user support for a LARGE corporate’s printing department so I’m a bit of a typography geek.

I attach an alternative LED TrueType font which contains all UPPERcase letters, which you might like to try instead. Admittedly it looks more like the LED on a digital watch!

Let me know what you think.

And while I think of it: do your layout attachment files already contain all the necessary non-standard fonts? It just struck me that not all users will necessarily have all of those fonts on their PCs!

Charlie, while I enjoy seeing your layouts, I have to say that your ‘LED’ font’s lower-case letters (i.e. Small Caps) look pretty horrible. I used to do user support for a LARGE corporate’s printing department so I’m a bit of a typography geek.

And while I think of it: do your layout attachment files already contain all the necessary non-standard fonts? It just struck me that not all users will necessarily have all of those fonts on their PCs!

Yes, they are kind of ghastly! I think “Digital” (my font) was actually installed when I put DARP on my machine.

For hayd93’s benefit: You will not see any changes you make with the Layout Designer until you stop and re-start mAirList. (That’s right, Charlie, isn’t it? ;))

No, the size/position is updated in “real-time”

Hey guys, can you please confirm that these fonts are free to distribute? I would not want to get into trouble for offering them in my forum.

To Charlie: ooh! I hadn’t realised the Layout Designer was real-time: thanks!
(In that case, I might try it out :D)

To Torben: I’ve checked ‘inside’ the LED font I submitted and it has no author nor copyright information. Its ‘internal’ name is LED Regular, but I’m afraid I can’t recall where nor when I acquired that font. After a quick Google search, I believe it is this font: http://www.abstractfonts.com/font/10387, which is advertised as free to distribute, and the font was submitted to that site by its webmaster, Alex. I hope that helps? One advantage of that particular LED font is that it has a comprehensive character set including symbols (like £ and ¥ and ß) and accented letters.

Quickly viewing Charlie’s ‘Digital’ font in the Windows font viewer shows that its proper name is Digital ICG, and is copyright by Image Club Graphics (hence the ICG) in 1994.

I’m actually a BIG respecter of copyrights of all sorts, including fonts.

I also respect the copyright. But most of all I dislike the way some copyright holders (and their lawyers) try to enforce their right: By claiming an aweful lot of money from every webmaster or forum administrator on whose site the files were found.

Yes, copyright enforcement lawyers tend to demand first and ask questions later (if at all!).

I once had a run-in with Warner Bros lawyers regarding a fan club I used to run locally for fans of the Babylon 5 TV show, but it ended amicably. I’d approached them to ask whether our club membership cards’ design was in infringement (it was, and they did the full ‘you will desist’ bit), so we sent them all the cards we’d made, plus a modest donation (£50) for them to make to a charity of their choice by way of ‘damages’ and apology.

They called us back more than impressed by our actions. It’s always fun to hear a previously hard-nosed ‘full-on attack mode’ lawyer nearly lost for words!

I’m told by other SF fan group and event organisers that it is the ‘best’ result they’ve ever heard of from any media company lawyers.

This probably sounds really dumb, but how do you get the different icons on there, eg the speaker for the imaging, mic for vt links??

These are defined using the Item Properties window for each item. However, you can “bulk” them by dropping the audio items into a Playlist and running my Icon Script

My Bulk Icon Script: http://forum.mairlist.com/index.php/topic,2558.0.html
(look carefully at that post, some icons have been attached!)

I also found some nice ones at iconarchive.com 8) - most, if not all, are fee for non-commercial use

Thank you for your help. Much appreciated. Had a play and got it working OK.
Is it possible to save cues so when you load up the same track another time it will remeber cue points etc?

In mAirList Config-Miscellaneous-File Import, ensure you set a “Central Folder for MMD Files” - Either a sub-folder inside your mAirList folder will do or if you have a network of PCs (on-air studio, production etc) a mapped drive is better.

Under “Enabled Features” - Ensure that the “Save to MMD” option is ticked.

Then, when you set cue/ramp/fade-out points in the PFL window, clicking “Save MMD” will write the info to an MMD file and save it to your MMD folder. If you do not specify an MMD location, they’ll default to the same location as that particular audio item. It’s up to you which way you do it.