I have a weird problem. I use Mairlist 7 with stereo tool winamp plugin. When i run mairlist it sounds good and everything is working. Then all of a sudden this annoying distortion appears on the stream. Is there anybody that has the same problem? Maybe a problem with stereo tool? This started to happen since i ugraded to a new computer. This never happened to my old computer. Really need help to solve this.

For a start please deactivate Stereo Tool and observe the output.

Mairlist has now been running for more then 24hrs without Stereo tool and everything sound good. No distortion. With that being said, i think we can draw the conclusion that Stereo tool is the issue here.

Does anybody have any exprience with this issue and know how to solve it?

Well, my first thought was “Just don’t use it!”

Stereo Tool is an extremely powerful software, the many setting options need an extensive training period. No one can teach you that here in a hurry and it is also the wrong place for it. This is not the Stereo Tool Support. You will have no choice but to study the manual and practice, practice, practice. At least until you understand what you are doing.

You are currently experiencing what happens when you set up Stereo Tool wrong.

You are currently experiencing what happens when you set up Stereo Tool wrong.

No, obviously not in general.

This started to happen since i ugraded to a new computer. This never happened to my old computer.

Then all of a sudden this annoying distortion appears on the stream. Is there anybody that has the same problem

I may be proofed wrong by @forsman but I don’t think he built up everything from zero again without importing mAirlist configurations and the presets for StereoTool (?)

And it seems to work until a point when it does not anymore. So it may be driven by something inside the encoder/StereoTool configuration.

@forsman are you using the latest dsp-plugin for StereoTool and the latest mAirlist build?

Is there a specific moment (after xx minutes?) when the error occurs?

Did anything change in your sound hardware compared to your former PC?

Can you show a screenshot of your Audio Routing including the encoder section and the settings of your stream connection?

You are missunderstanding the whole thing. This problem does not accure on the basis of to little knowledge in Stereo Tool. I been working with radio and audio processor for 15 years. I know exactly how to set them up. This is not a settings issue. This is a “bug” somewhere. When i start playing music in mairlist it sounds great with stereo tool. What happens is that after some hours ( i don’t know how long) the sound starts to sound really distorted. Like really distorted.

If it’s slowly getting stronger, it could also be a feedback loop somewhere.

No offence intended, but I assume you are running a licensed copy of Stereo Tool?

That was my first thought, but the free version has no restrictions. At least I could not find anything about it.

No offense, but I still think that you might get better help in the StereoTool forum.

Any chance you answer my specific questions?

are you using the latest dsp-plugin for StereoTool and the latest mAirlist build?

Did anything change in your sound hardware compared to your former PC?

Can you show a screenshot of your Audio Routing including the encoder section and the settings of your stream connection?

Well that could be the case. I’ve never been listening when this happens. I only wake up to this distortion.

Yes bought copy of stereo tool with all the extras

Sorry for the delay @Stefan_Hillen. Here’s my answer:

Yes i imported setting from my old system. When this problem accured i tried to set all up again from scratch but that does not seems to help.

I agree with you @Stefan_Hillen im pretty sure the problem is in either stereo tool or the encoder in mairlist. But of course that’s my guess.

I been running mairlist for years and never had this issue until i installed a new computer. Thats weird right? The new machine is a lot better then the old one. AMD Rayzen 7 5600g. 16GB DDR4 ram, 1 TB ssd.

Yes i am using that latest build of mairlist and also the latest stereo tool version. I have tried to run the winamp plugin and also last night i tried the VST plugin. Same problem accuress after some hours. I can not tell exactly when it happens but usually when i wake up in the morning this problem is there.

Nothing has changed in my hardware setup except th fact the have a new computer. I use the D&R Webstation with built in sound cards. I use this mixer with my old computer and also now wih the new one.

Attached also the screenshots you asked for. 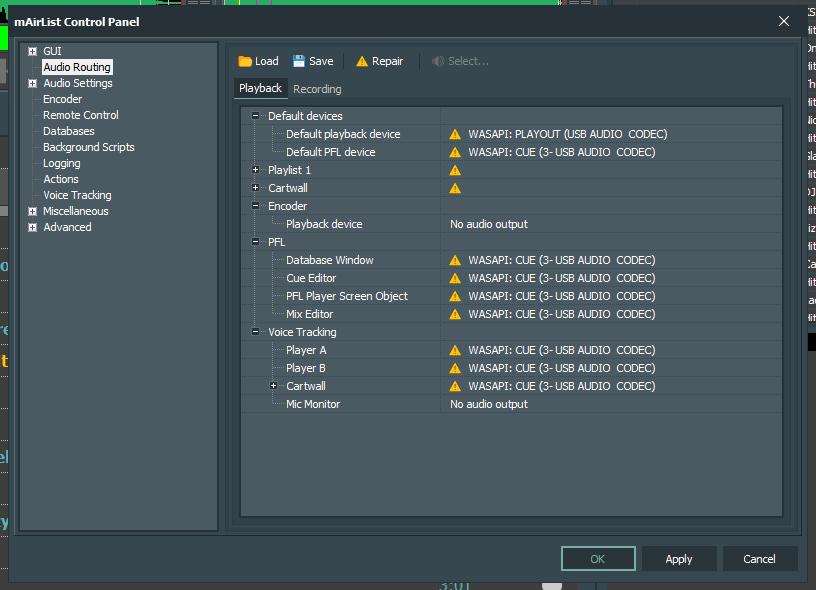 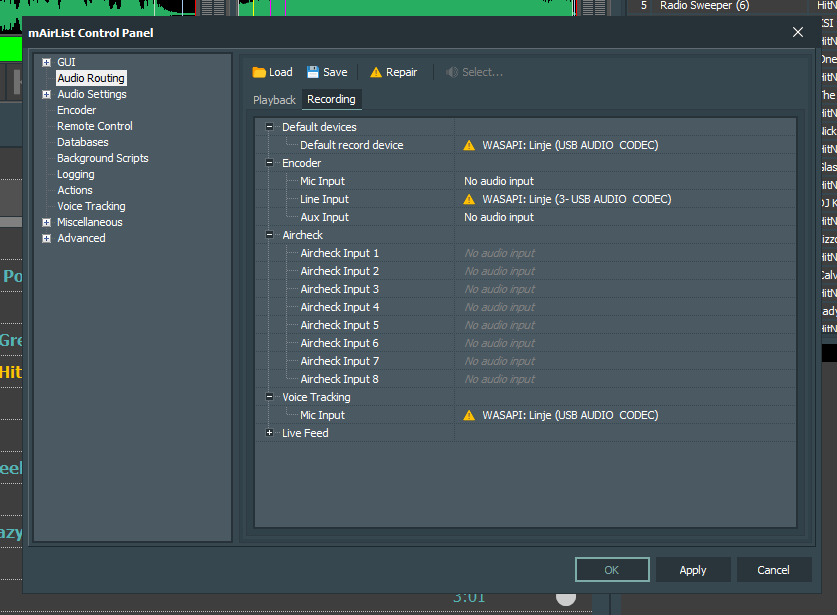 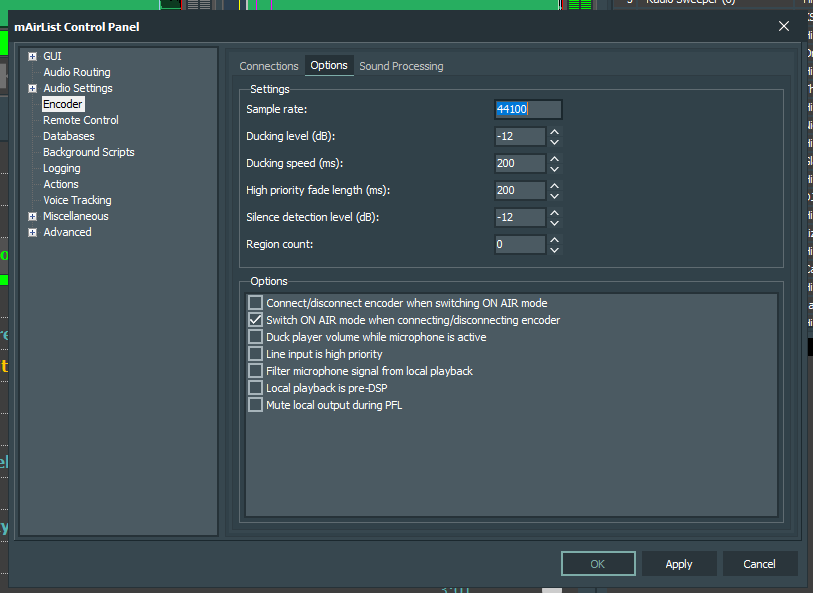 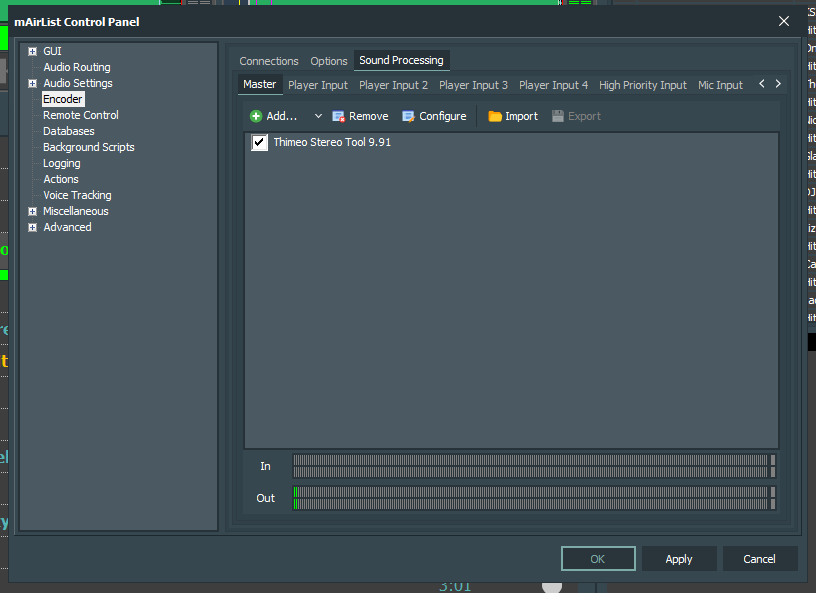 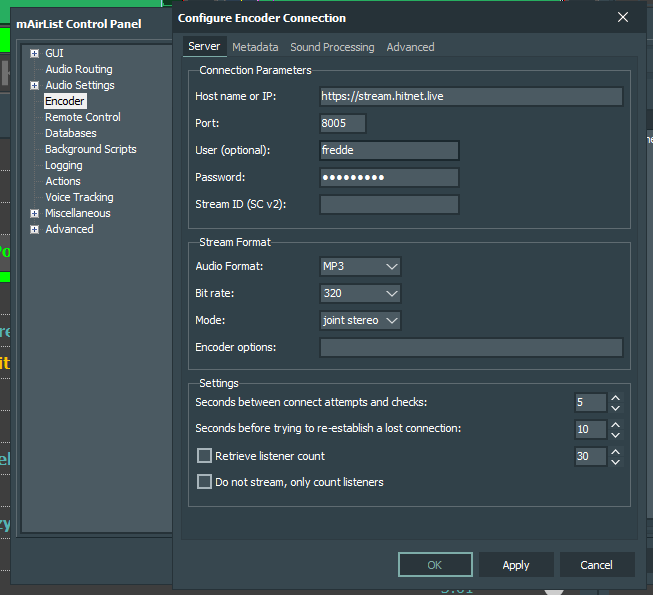 -signs in front of the audio devices derive from?

@Tondose Hmmm well that im not sure about. But what ic an say is that it has worked with all the audio settings.

First: I see a lot of repair icons - was the Webstation turned off when you made the screenshots?

The problem for me is that I just can guess how you set up the webstation’s sound cards and what soundcard you linked to which channel / fader based on your screenshots because of the “confusing” naming.

first in windows’ system configuration audio panel to make it much more recognizable (even for you!)

Following question: Are you really using the correct Master Line output of the Webstation for the encoder?

It’s really easy to mix up with the VoIP-Backchannel.

Another thing to try: Are you using only ONE channel of the Webstation for the play-out (guessed by the name of the default playback device because the screenshot didn’t show the Playlist section)?

Does the same distortion appear when you link the Player(s) of mAirlist directly to the encoder without using the Webstation?

This way we could identify if the Webstation causes the problem or your PC.

Well everything worked so i was just lacy and did not update the (!). Now i have done it correctly.

Well this is also weird. I had it setup with all the names of the audio channels before but yesterday microsoft did a major update on win 11. I did the updates and that changed all the names and audio settings. Never had that one before. Now its been all set up again with good names. Sorry the screenshot was a bit confusing.

Yes i am sure im using the correct master input for the encoder.

Well i haven’t tried to set the players directly to encoder. Will for sure try that! Still this was never a problem before with old computer setup and the webstation.

Thanks for helping me out again

I also remember that the D&R Airlite and Webstation have problems with USB 3.