In the config tool I noticed that up to 8 inputs can be assigned the air check recorder. So I want to assign the main on air signal, the aux signal and the line in signal. However, in the air check window, I do not see a way to select which source to record. What is the point of 8 inputs? Am I missing something?

I have, but, is it possible to switch between inputs from withing the aircheck app. For example, when doing live break I want to record the line in. When recording a phone call in auto mode I want to record the AUX. I have both line in and AUX set as inputs in the config but only the first one is beeing recorded

I don’t think it is possible (the Aircheck Recorder does not observe any changes to the audio device config once it is running and recording), but you can add another Aircheck Recorder window for the second input.

Indeed it worked that way. I have set up another aircheck recorded that has Line in an in input and we can record the processed signal when doing live shows. The other aircheck recorded is set to receive in on air input which is the entire mixer when we run in non stop mode with the airlie so we can record interviews. However, each time we want to record we have to manually press record on either of the recorders. Having in mind that we run the Airlite mixer which interfaces great with the remote starts of the mairlist, is it possible to somehow set the aircheck recorder to start recording each time the mic is turned on and stop recording when the mic is turned off without having to add extra hardware/triggers/switches?

Can you read German?

Just scroll through the posts, you will find the required commands there.

Bottom line: Assign the Aircheck Recorder a Remote Control ID in the advanced properties, default is “AIRCHECK”. Then use commands like “AIRCHECK ON”, “AIRCHECK OFF” etc. (The first part is the remote ID you configured.)

I cant see Air check in the remote control… am I looking at the right place? 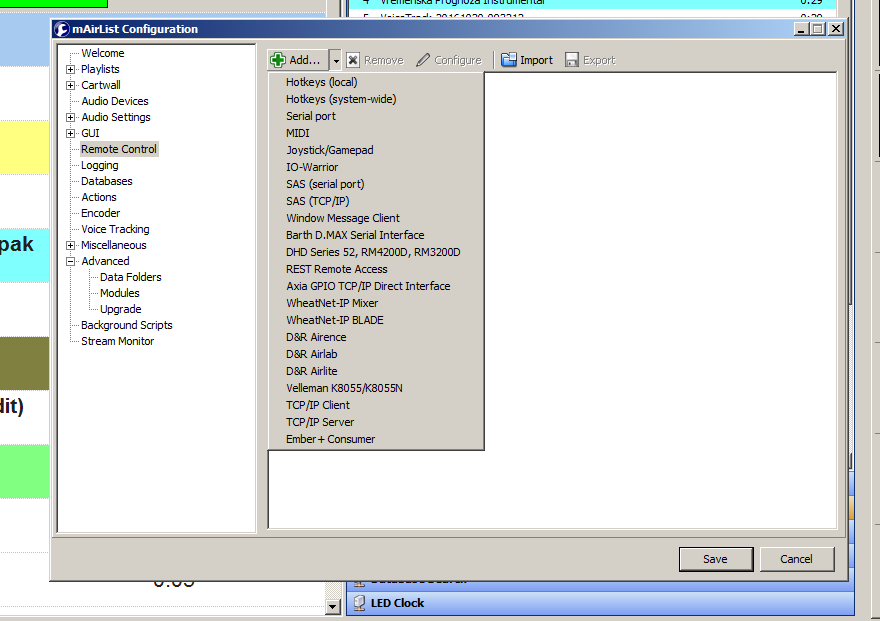 OK Remote ID is AIRCHECK I assume now I will have to create a script and use command lines? Are you aware of a script that is already written? I have no idea how to code a script…